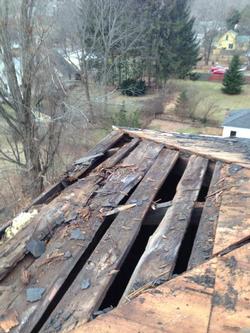 MONTAGUE CENTER — When the Montague Common Hall cupola began to demonstrate an urgent need for repair, the local landmark's owner enlisted a contractor, who quickly found the situation was much worse than it appeared. Now, the Friends of the Common Hall is scrambling to raise funds to pay the contractor, with a day of emergency fundraising Sunday.

Dr. Mary Melonis said the Common Hall has survived as a rental and community space since it ceased to be a Grange hall in 2013, when neighbors and former Grange members banded together to save the hall. The Friends of the Common Hall have completed some lighter repairs to the historic building since, but the latest came as a shock.

"This came up like a crashing mountain ... we thought we were safe and sound with a little cushion in the bank, once we found out we not only didn't have it but had no way of paying off what (the contractor) did, we decided to get going," Melonis said.

The Friends of the Common Hall will hold an open house Sunday morning and a dance in the evening in hopes of making up the $4,100 shortfall they were left with when the work was finished in January.

Repairs did not hold and the situation deteriorated over the next three months.

The Friends agreed to hire a contractor and a crew went to work in the worst of the winter weather. Melonis said the contractor was prompt and efficient, but the project hit a serious snag when workers removed the disintegrating shingles only to find that a lot of the plywood under the roof was gone and a structural beam had completely rotted.

"So we had really no choice, if we were going to save the structure at the top we had to start there so we decided to let him go and finish it, do it right," Melonis said.

With just enough in the bank for the original $8,800 contract and a small cushion, the Friends couldn't pay the contractor, who Melonis said agreed to wait for the fundraiser.

Originally a Unitarian church, the building dates to 1835 and is on the National Register of Historic Places. As a hall of the National Grange, the building housed monthly meetings and regular community events, and Melonis said the membership always included the tradesmen needed to keep the building in repair.

In 2013, the composition of the village had changed, interest in the ritual and monthly meetings of the agricultural association had waned and the group resigned its charter with the national organization.

"Most of us who were grangers were either disappearing or dying and there wasn't enough members to keep the hall going," Melonis said.

Former grangers and concerned neighbors got together and decided to take a chance and save the hall, Melonis said, incorporating as the nonprofit Friends of the Common Hall and buying the building from the Grange for $1. The hall rents out for events, dances, yoga classes, and continues to house the archives of the Historical Society, which has also donated to the repair effort.

Sunday's fundraising begins with an open house from 10:30 a.m. to noon, a community potluck at 5:30 p.m. and a cupola fundraiser contra dance beginning at 6:30 p.m. with caller David Kaynor and the All Acoustic Open Band.

Fiddler Mary Lauren Fraser will lead a Shetland fiddle workshop for intermediate players beginning at 3:30 p.m., with all donations going to the cupola roof fundraiser.

The hall is located at 34 Main St. in Montague Center.

Donations may also be sent to The Friends of the Common Hall, c/o Mary Melonis, Box 88, Montague, MA 01351.